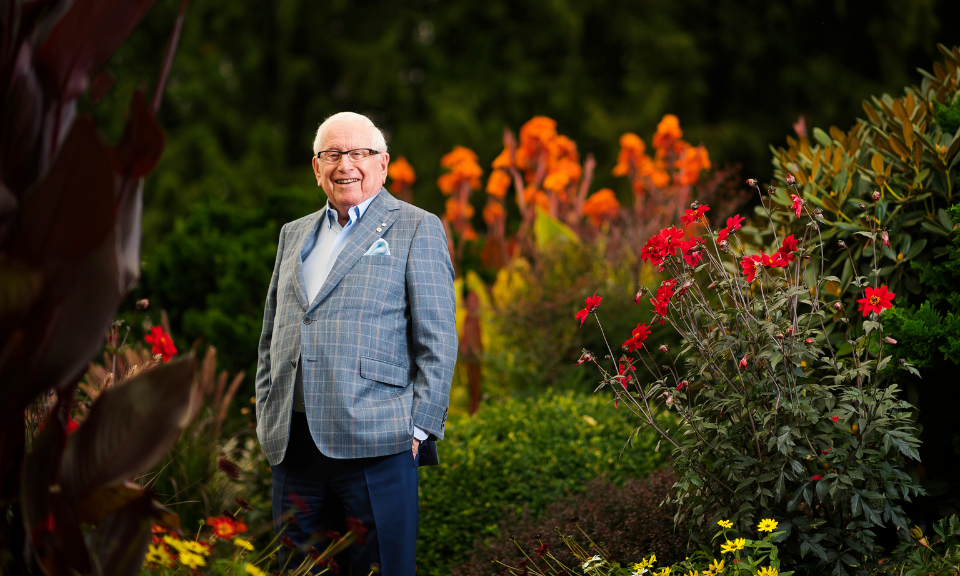 It is with deep sadness and a great sense of loss that we share the news of the passing of Joseph (Joe) Segal (C.M., O.B.C., C.B.H.F., LL.D.), long standing board member, chancellor emeritus, and dear friend of Simon Fraser University. Joe passed away peacefully in May 2022. He will be profoundly missed.

A beloved philanthropist, community leader and mentor, Joe worked tirelessly to improve the lives of people throughout British Columbia and Canada. For more than four decades, his leadership and generosity has shaped SFU and will continue to benefit its students and communities for many generations to come.

Joe Segal was a self-made man, born in Vegreville, Alberta. After serving in World War II, he settled in Vancouver and built a merchandising empire from the ground up, founding Fields Stores, which later acquired Zeller’s and, in 1976, the Hudson’s Bay Company. He went on to form Kingswood Capital Corporation, developing real estate in BC and beyond and investing in various manufacturing and retail companies.

Joe spent considerable time sharing his wisdom and expertise with everyone from small business owners to influential CEOs, all of whom prized his mentorship. In 1981, he brought his energy and unique perspective to SFU, where he served on the board of governors for more than 12 years and as chancellor from 1993 to 1999. His leadership and contributions to SFU were pivotal to its growth as a major research university and its connections to the communities it serves. He spearheaded the establishment of SFU’s Vancouver campus at Harbour Centre as well as the Morris J. Wosk Centre for Dialogue, and generously donated the former Bank of Montreal heritage building to house SFU’s Segal Graduate School of Business.

Joe was an enthusiastic champion of the university. His advice, energy and wisdom supported eight presidents and his business savvy and connections helped SFU to thrive. His commitment to community building and philanthropy was recognized in 1988 with a Doctor of Law, honoris causa, from SFU and in 1992 with the President's Distinguished Community Leadership Award, honouring his innovation, optimism and strong sense of public service to SFU’s community. He was also a recipient of both an Order of Canada and an Order of British Columbia.

As well as his many successes as an entrepreneur and executive, Joe humbly dedicated much of his time to countless charitable causes, including BC Children’s Hospital and the Variety Club, from whom he and his wife, Rosalie, received the International Humanitarian Award. Joe and Rosalie also received a special Lifetime Achievement Award in 2017 from the Association of Fundraising Professionals Vancouver Chapter for their exceptional legacy of giving.

With great determination, generosity and extraordinary leadership, Joe Segal has left an indelible  imprint on SFU and its communities. We extend our deepest condolences to the Segal family.